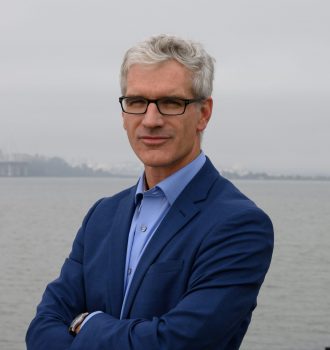 Kevin Banister is Chief Development Officer for the Simply Blue Group, a leading early-stage developer of sustainable and transformative marine projects focused on floating offshore wind, sustainable aquaculture and wave energy.  In his role, he is responsible for originating and expanding global project opportunities for the company beyond its roots in Ireland, where the company was founded, and the British Isles.  Prior to joining Simply Blue, Kevin was Head of Development for Principle Power, Inc., the California based owner/designer of the proprietary WindFloat technology, a floating foundation for offshore wind turbines.  In this position, he lead Principle Power’s business and project development activities around the world, which included interactions with utilities, developers, government officials, stakeholders and policy makers in Europe, Asia and the United States, and resulted in GW’s of offshore wind project development.

Based in Portland, Oregon, USA, Mr. Banister is a long-time renewable energy professional and oceans advocate with experience in energy policy, energy project development and partnerships.  He has been a Government appointee for the establishment of renewable energy policy in the US, was a founder of Offshore Wind California and is today the Board Chair for the Pacific Ocean Energy Trust (POET).  Kevin is a frequent speaker on ocean energy topics at conferences and seminars around the world and is a graduate of the University of California at Santa Barbara and holds an MSc in Economic Development from the London School of Economics.