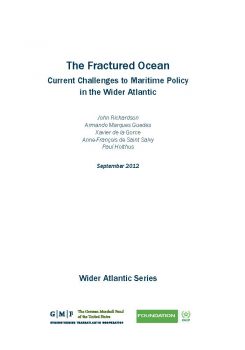 This series of papers is dedicated to the hypothesis that analyzing the complex reality of international relations between the countries on opposite coasts of the Atlantic Ocean from the perspective of the Atlantic as a whole, rather than looking at two sets of transatlantic relations in the Northern and Southern hemispheres, can shed new light on old dilemmas and point the way toward new directions for government policy.

This particular paper examines the challenges posed by human activity on the Atlantic Ocean itself, and around its coasts, looking at it not so much as a vast expanse separating the Americas from Africa and Europe but rather as a shared resource and an important connector. All littoral states face a common challenge in maintaining its value as a foundation for sustained “blue growth” in the years to come.

Chapter 4, written by Paul Holthus, investigates the exploitation of the resources of the Atlantic, both living and mineral, including renewable energy. He notes the geographic distribution of each resource and the extent of its current exploitation. In the case of mineral resources, this encompasses the many deep ocean resources that are potentially exploitable in the future, such as the polymetallic sulfides found on ocean ridges, which are becoming commercially interesting, something that does not apply to many other mineral deposits. The exploitation of such resources, in areas beyond national jurisdiction, is regulated by the International Seabed Authority, which was set up under the United Nations Convention on the Law of the Sea. The chapter also looks at inshore mineral deposits, such as sand and gravel, which have been extracted for centuries. In this context, the environmental impact of the activities is examined.