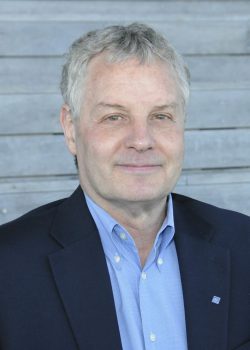 Bill Staby is Founder and CEO of Boston-based Resolute Marine Energy, Inc. (RME) which is developing a technology that harnesses the energy of ocean waves to provide clean water and electricity for remote and off-grid communities in developing countries and islands. RME currently has projects under development in Alaska, Oregon and two countries on the African continent.

Bill is Head of the U.S. delegation to IEC TC-114 in Geneva, Switzerland where he has a leadership role in the development of technical standards and certification processes for the marine renewable energy industry. Bill also serves on the Technical Advisory Committee of the University of North Carolina Coastal Studies Institute and is a member of the board of the Marine Renewable Energy Coalition which is developing the first tidal energy test site in the United States.

Earlier in his career, Bill was an investment banker at First Boston Corporation and later he was co-head of the North American mergers & acquisitions department at Rabobank where he focused on strategic transactions in the food and agribusiness sector.

Bill was a featured speaker at TEDx Boston in 2010, a panelist at the 8th annual International Forum for Sustainable Development held at UNESCO headquarters in Paris in 2013 and in 2015 he was a speaker at the “World Water Day” event held at the United Nations in New York.

Bill received his M.B.A. from New York University in 1988 and he has completed executive education programs at Harvard and MIT.