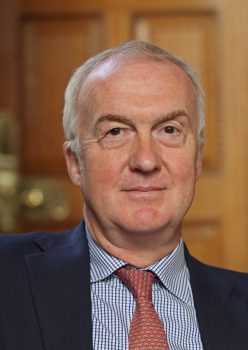 Tom Boardley was appointed Executive Vice President at Lloyd’s Register (LR) on the 14 March 2016, responsible for driving LR’s market influence across all of LR’s business activities and the development of a new External Affairs function.

From 2009 to 2016, Tom led the LR Marine business as its Director, responsible for worldwide operations, strategy and business development. Prior to joining LR in 2009, Tom had accumulated 30 years’ experience in the container shipping, ports and logistics business. Commencing his career with the container shipping division of P&O, originally trading as OCL and subsequently as P&O Nedlloyd, he held various management roles in the UK, Taiwan, Korea and Japan before being appointed as Director for Australia and New Zealand, based in Sydney in 1996. Tom left P&O in 2004, joining the Japanese shipping and logistic company NYK, heading their European operation.

Tom is currently the President of RINA (Royal Institution of Naval Architects). Previously, Tom was the President of the UK Chamber of Shipping (2015/2016) and appointed to the UK Maritime Growth Study Advisory Committee (DfT) in January 2015. Tom served as Chairman of IACS (International Association of Classification Societies) for the 2012/2013 year.

Highly regarded within the maritime industry, Tom has featured in the Lloyd’s List Top 100 People in Global Shipping and the Tradewind’s Power 100.